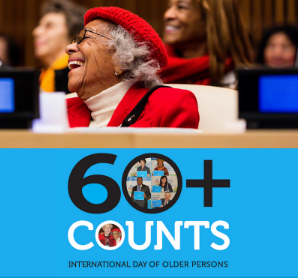 The 28th International Day of Older Persons (IDOP) was celebrated on 1st October 2017 and activities to mark the occasion are taking place across the globe this week. The theme for the 2017 IDOP is ‘Stepping into the Future: Tapping the Talents, Contributions and Participation of Older Persons in Society’. The theme aims to explore effective means of promoting and strengthening the participation of older persons in various aspects of social, cultural, economic and civic and political life. It seeks to enable and expand the contributions of older people in their families, communities and societies at large.

GAROP members around the world are organising and participating in a range of activities to commemorate the day, explore the theme and address the challenges of ageism and age discrimination in their local and national contexts. IDOP also provides an important platform to unite the chorus of voices calling for stronger international protections for older people’s rights through the development of a new UN convention on the rights of older people.

HelpAge España organised an international forum on older people in Pamplona in partnership with the Government of the Navarra region of Spain. The event brought together national and international experts on different aspects of ageing and older people’s rights. It considered the challenges of ageism in ensuring older people’s full participation in social, political, economic, family and everyday life as well as the opportunities offered by a new UN convention.

This year HelpAge International’s Age Demands Action (ADA) campaign celebrates its tenth year. The Campaign that now takes place in over 55 countries challenges age discrimination, fights for the rights of older people and advocates for a new UN convention. You can download HelpAge’s ADA campaign toolkits and training guides on how to run workshops focusing on ageism using the links below. An infographic celebrating the achievements of older activists over the life time of the campaign can be viewed on the HelpAge website here.

Earlier this month to mark IDOP 2017 the Secretary General of DIS-MOI in Mauritius, Vijay Naraidoo, issued a strong call for a UN convention, highlighting that other policy frameworks such as the Madrid International Plan of Action on Ageing remain insufficient. The article urges Mauritius to ratify the Protocol to the African Charter on Human and People’s Rights on Older People’s Rights and to play a leading role in the African region in the UN process towards a new convention. DIS-MOI’s Commission on the Rights of the Elderly are implementing a project with the support of the Corporate Social Responsibility Foundation to raise awareness of older people’s rights and to facilitate debate and an exchange of ideas.

Elsewhere in the region in Kenya, the organisation KARIKA will hold an event marking IDOP 2017 and acting as the official opening ceremony of the second older people’s centre in Gacui.

On 5th October, IDOP will be marked in Nigeria with a ceremony to sign a Memorandum of Understanding between the Dave Omokaro Foundation and the National Human Rights Commission. A new national body, the Open Ended Working Group on Rights of Older Persons will be established to bring together the various stakeholders committed to furthering the rights of older people. The Working Group members will work together to identify gaps in the national protection of older people’s rights and propose solutions, including through international instruments.

In Canada on 5th October, the Canadian Network for the Prevention of Elder Abuse (CNPEA) will host a free webinar about the ‘Engaging Older Women in Your Community’ tool. The tool is intended to support agencies to anticipate and address structural barriers to the participation of older women in community initiatives aimed at legal and policy change. The webinar will be co-presented by the Canadian Centre for Elder Law and the West Coast Women’s Legal Education and Action Fund. More information and details on how to register are available here.

Later this month, representatives from Ageing Nepal will travel to Okhal Dhunga and Khotang, two remote districts of Nepal, to provide orientation on the Sustainable Development Goals with a focus on this year’s IDOP theme. The orientation events will include local government officials and elected representatives, journalists, and local youth and academics reaching 135 people in total.  A training manual will be developed through this activity to act as a guide to support future work.