This year on 1st October, the world marked the 30th anniversary of the UN International Day of Older Persons. The event was celebrated while many countries are still responding to the challenges of the COVID-19 pandemic that has had a devastating impact on the lives of many older people globally. To mark the International day, the Global Alliance for the Rights of Older People issued a statement emphasising ‘Now’s the time to act on a convention’.

Members of the Global Alliance in all regions have demonstrated resilience and creativity in adapting to the new and challenging circumstances resulting from this pandemic. NGOs remain determined to raise awareness of the everyday ageism and discrimination faced by older people and to continue campaigning for the stronger protection of older people’s human rights . The global collective strength and reach of our members is huge. Below is just a selection of the activities that some of our members undertook to celebrate the International Day of Older Persons 2020. Many more were also active on social media and organising virtual events.

The Coalition of Caregivers and Advocates for the Elderly in Liberia organised an event with a panel discussion and a special presentation from the Independent Human Rights Commission of Liberia. Medical and food supplies were also distributed to older people who attended the event. In Rwanda the NGO, Taking Care of Retired People, carried out home visits and distributed food and pigs for farming to older people and encouraged families to mobilise in helping to prevent the spread of Covid-19. In Uganda, there was a Presidential address to commemorate the International Day delivered at an event with the support of the Ministry of Gender, Labour and Social Development and the participation of Uganda Reach the Aged Association.

Campaigners from DIS-MOI in Mauritius and the Good Samaritan Social Service Trust in Tanzania gave radio interviews highlighting the significance of the International Day, raising awareness of the violations of older people’s rights and urging everyone to expose ageism and age discrimination. DIS-MOI also organised an event with the Mauritius Council of Social Service focusing on the International Day theme with eminent stakeholders from the UN, the Senior Citizens Council and the National Human Rights Commission.

Some members also participated in the global Age Demands Action campaign coordinated by HelpAge International. In Cameroon, the NGO ACAMAGE, set up a library as a way of exposing ageism and building capacity on older people’s rights. Its older campaigners also called for a UN convention and the ratification of the African Union Protocol on older people’s rights. Age Nigeria Foundation combined Nigeria Independence Day Celebrations with their Age Demands Action and UN International Day of Older Persons campaigning. The call to action from older campaigners was ‘Let’s Put a Stop to Ageism in Nigeria’!

In India, the DadiDada Foundation organised an event in Lucknow on the theme of ‘Senior Citizens and The New Normal’.  The Development, Welfare and Research Foundation hosted a webinar on ‘Coping Strategies for Healthy and Happy Ageing’ in partnership with local older people’s organisations in Delhi. GRAVIS organised a virtual event for members of Village Older People’s Associations and Village Development Committees focusing on older people’s mental health during COVID-19. The Silver Innings Foundation was a partner in an online talent show for older people over three days.

In Bangladesh, the Resource Integration Centre and the Forum for the Rights of the Elderly participated in an online panel discussion on ‘Older persons in Bangladesh: priorities and challenges’ with the Department of Population Sciences at the University of Dhaka in cooperation with the UNFPA, Bangladesh. There was a Press Conference to launch a booklet containing the goals and objectives of the new organisation ‘All Bangladesh Senior Citizen Welfare Society’. A webinar also took place on 4th October through the new ‘Platform for the Elderly, Bangladesh’ (‘Probin Odhikar Mancha, Bangladesh’) with the State Minister of Social Welfare in attendance and 90 people from different sectors discussing older people’s rights.  The Resource Integration Centre held twenty five grassroots consultations with Older People Associations where older people talked about how they are coping and future sustainability. Various awareness materials on COVID-19 were shared in the communities as well as cash money for those affected by the crisis.

The Older Persons Advocacy Network in Australia released a series of powerful interviews to mark the International Day with older people telling their personal stories.

In Spain, a coalition of NGOs released a joint manifesto drawing attention to the violation of rights that older people have suffered due to the COVID-19 pandemic. This included a call for a dedicated UN convention on older people’s rights. In Germany, a large international online conference organised by the German Federal Ministry for Family Affairs, Senior Citizens, Women and Youth, the German National Association of Senior Citizens’ Organisations (BAGSO) and AGE Platform Europe explored how to strengthen older people’s rights in times of digitalisation with a focus on lessons learned from COVID-19. AGE Platform Europe also compiled this round-up of some of their European members’ activities and this analysis of the momentum created by COVID-19 and the new supporters of older people’s rights now joining the debate.

In the US, AARP teamed up with Foreign Policy to host a virtual dialogue on older people’s rights with the UN High Commissioner for Human Rights, the Executive Director of Human Rights Watch, the former Secretary General of Amnesty International, and the CEO of HelpAge International. CanAge and HelpAge Canada organised a webinar focused on the topic ‘How to Make Canada more age-inclusive’ with support from a number of co-hosts and sponsors.

In Eastern Europe, the Public Union of Belarusian Pensioners protested against police violence and harassment, including against older people. Older people organised a march in Minsk on 5th October and Tatsiana Belko of the Public Union of Belarusian Pensioners issued a public statement. The marches will continue on a weekly basis.

CONICET and ILC-Argentina are working with the University of Buenos Aires to organise an international online seminar entitled “Older Women of America” focusing on the rights and freedoms in old age from the perspective of Latin America’s older women. The initiative will take place over six days between 12th October to 16th November with panels consisting of representatives of older people’s organisations and academia from various countries. Following the six meetings a document will be produced on the human rights of older people during the pandemic setting out actions for the future.

ISalud is working with the HelpAge Southern Sub-regional Network to organise a series of seminars every Tuesday through October under the overarching theme of “Learning from COVID-19. Strengthening the rights of older people in Latin America”. The seminars will address different topics, including loneliness and participation and citizenship.

On 15th October, ILC-Argentina organised the international conference “The Impact of Longevity in a World that must be Reinvented” in cooperation with 53 organisations working for the human rights of older people. This was in the framework of a campaign launched on October 1st against discrimination against older people (#cortalaconladiscriminación) with the support of organisations from Latin America, Canada and USA.

HelpAge International released a series of animations designed to highlight and challenge the assumptions we make about older people. CommonAge organised a Virtual Commonwealth Elders Forum on the theme ‘Ageing and Ageism in the Commonwealth’ with contributions from high-level stakeholders from the UN and across the Commonwealth. Two more high-level online events organised by the NGO Committees on Ageing in New York and Geneva brought together impressive line-ups of senior stakeholders from the UN system, governments and civil society representatives. There were contributions from the UN Secretary-General, the High Commissioner for Human Rights, the Independent Expert on older people’s rights and the Chair of the UN’s Open-Ended Working Group on Ageing, among others.

For more information about any of the above, please contact the GAROP Secretariat at info@rightsofolderpeople.org. 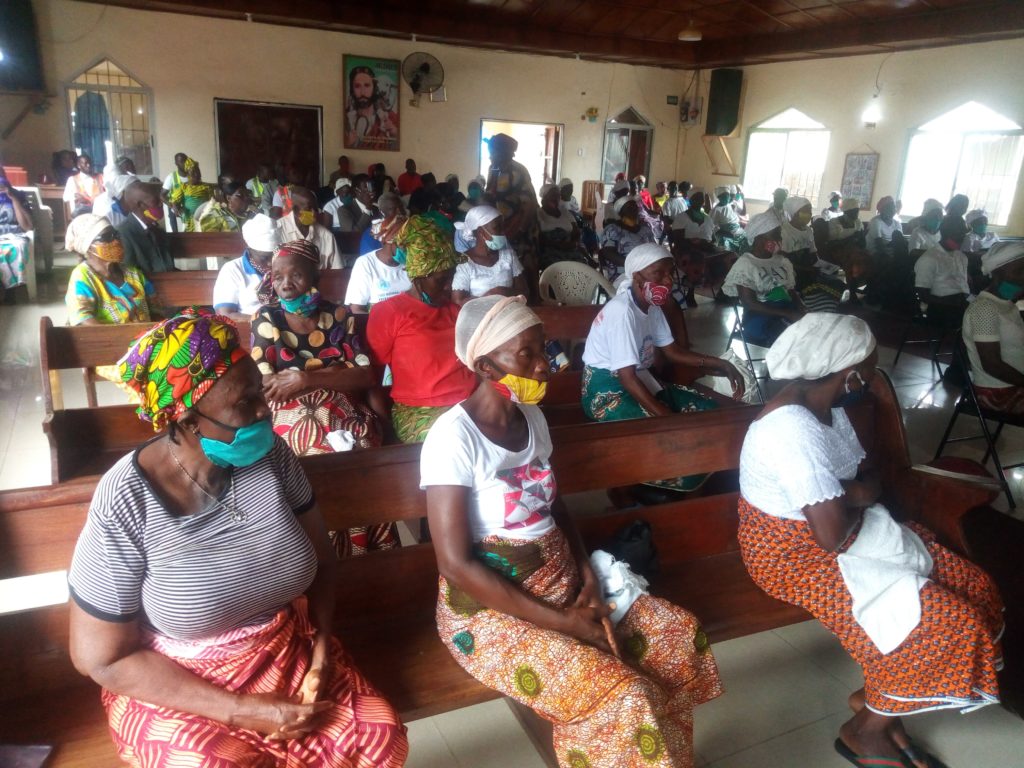 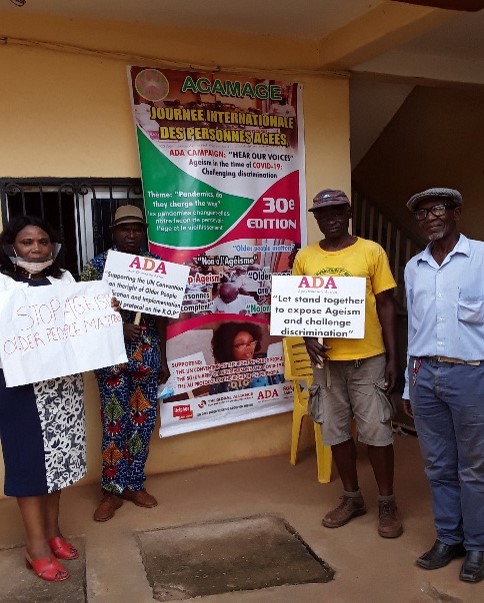 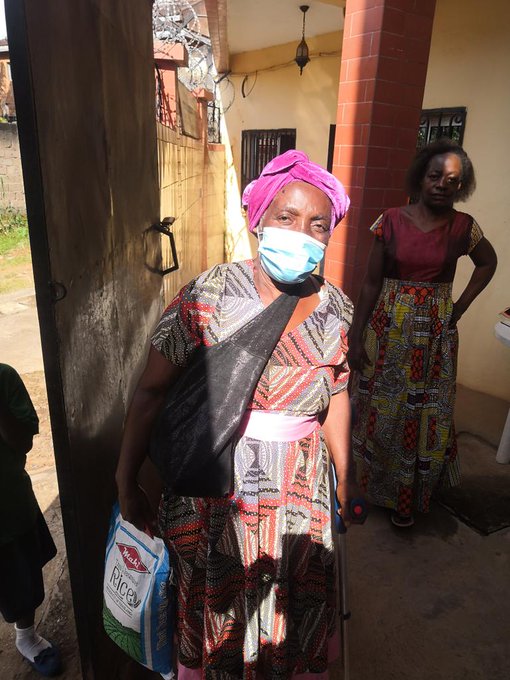 Mamy Martha, 78, from Cameroon says “My high hope is to see the UN convention on the rights of older people coming into force, so as to end ageism, violence, abuse and neglect now and for ever” 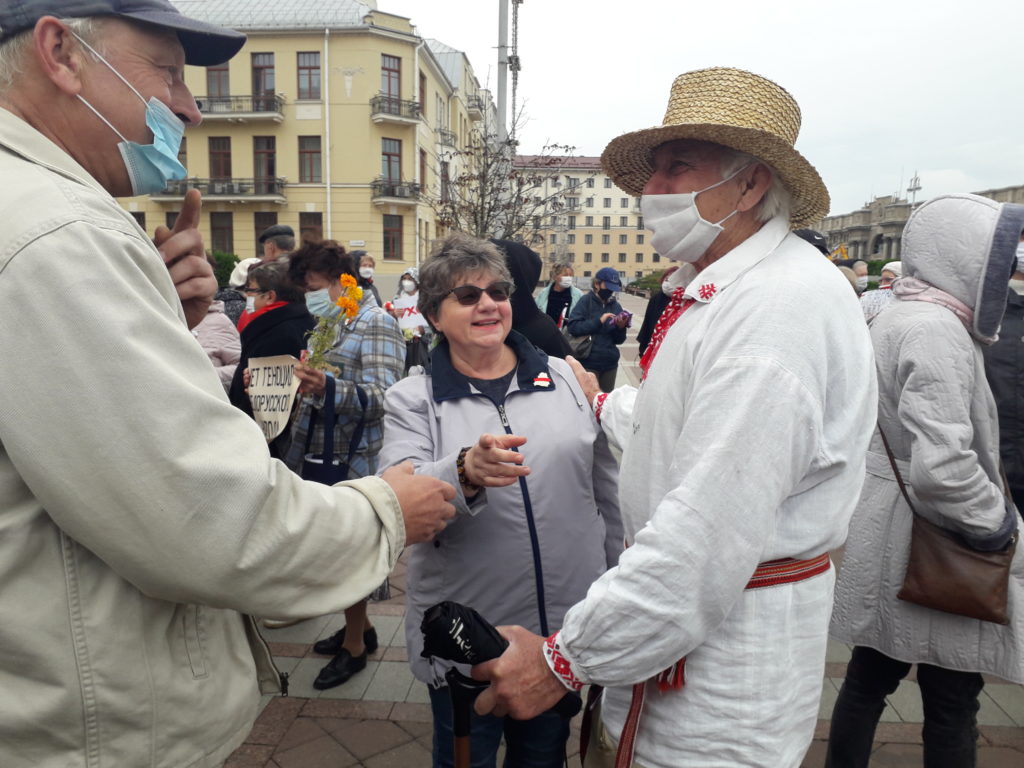 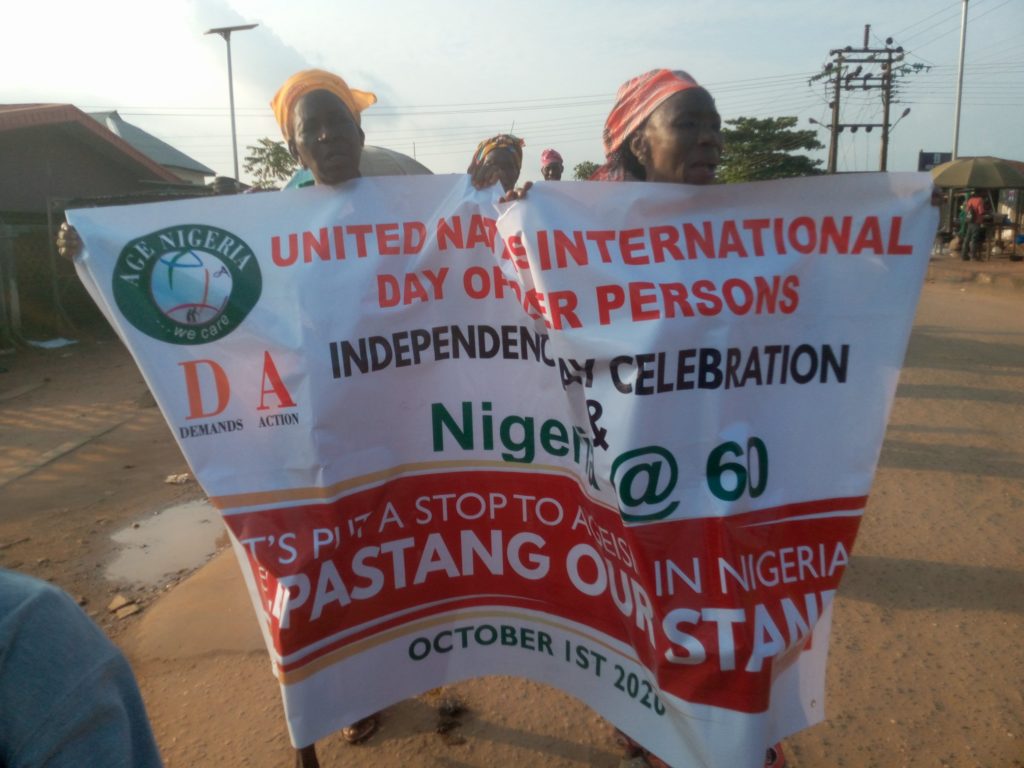 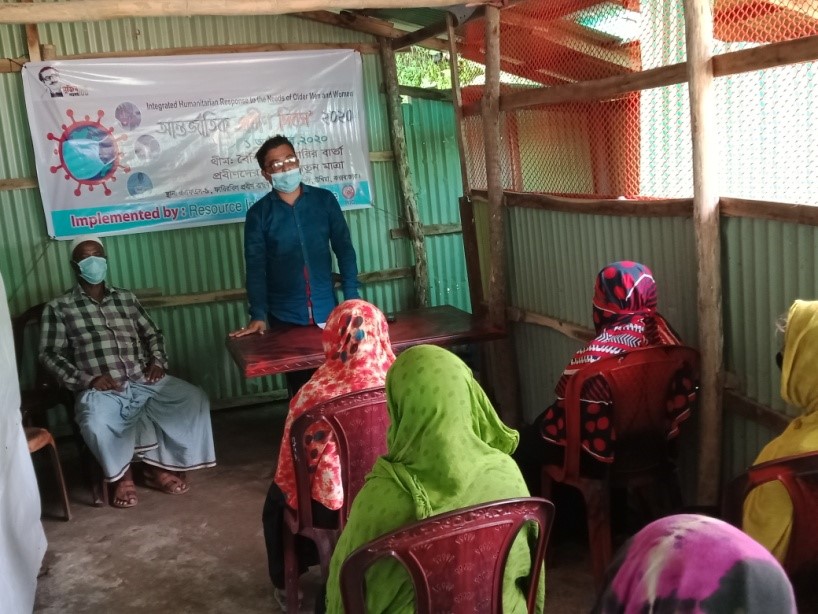 Grassroots consultations with Older People’s Associations in Bangladesh to raise awareness of COVID-19 and hear older people’s views and experiences. 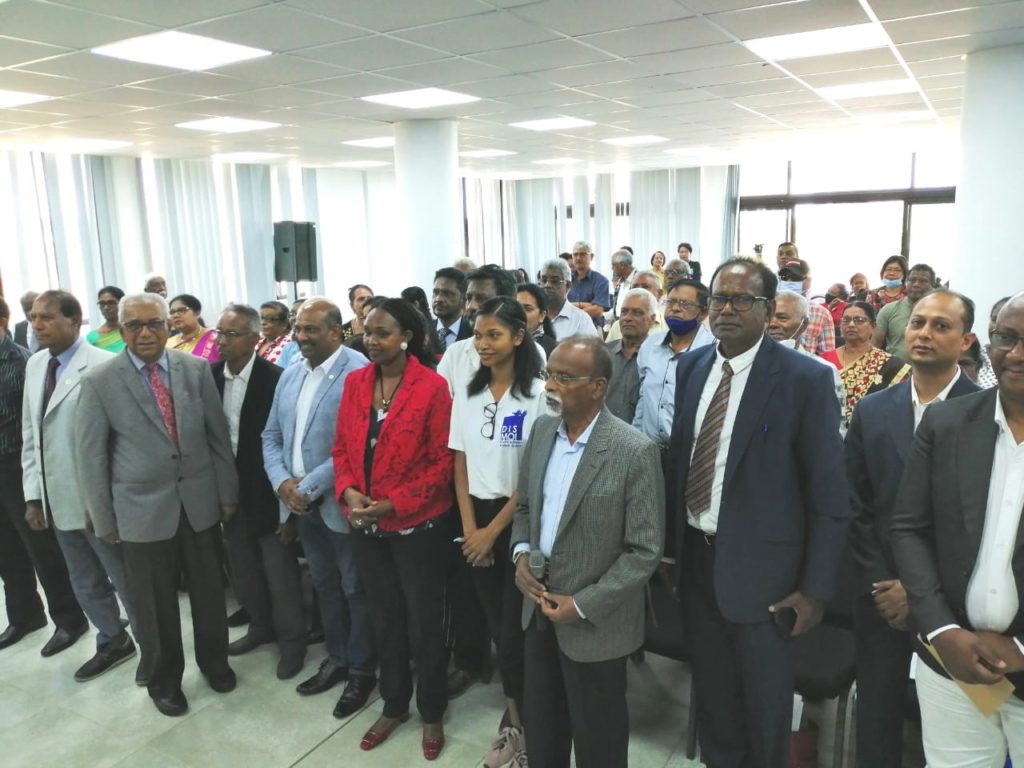 Delegates at the symposium organised jointly by DIS-MOI with MACOSS (Mauritius Council of Social Service) on 2 October. 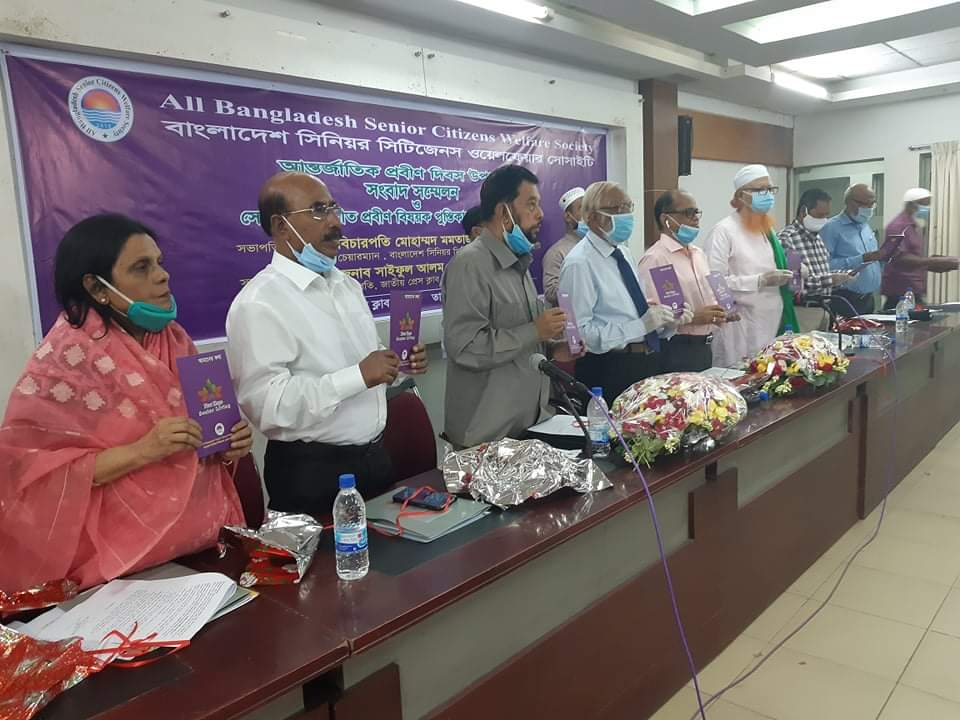