Outcomes of the webinar: ‘Long term and palliative care in older age’ 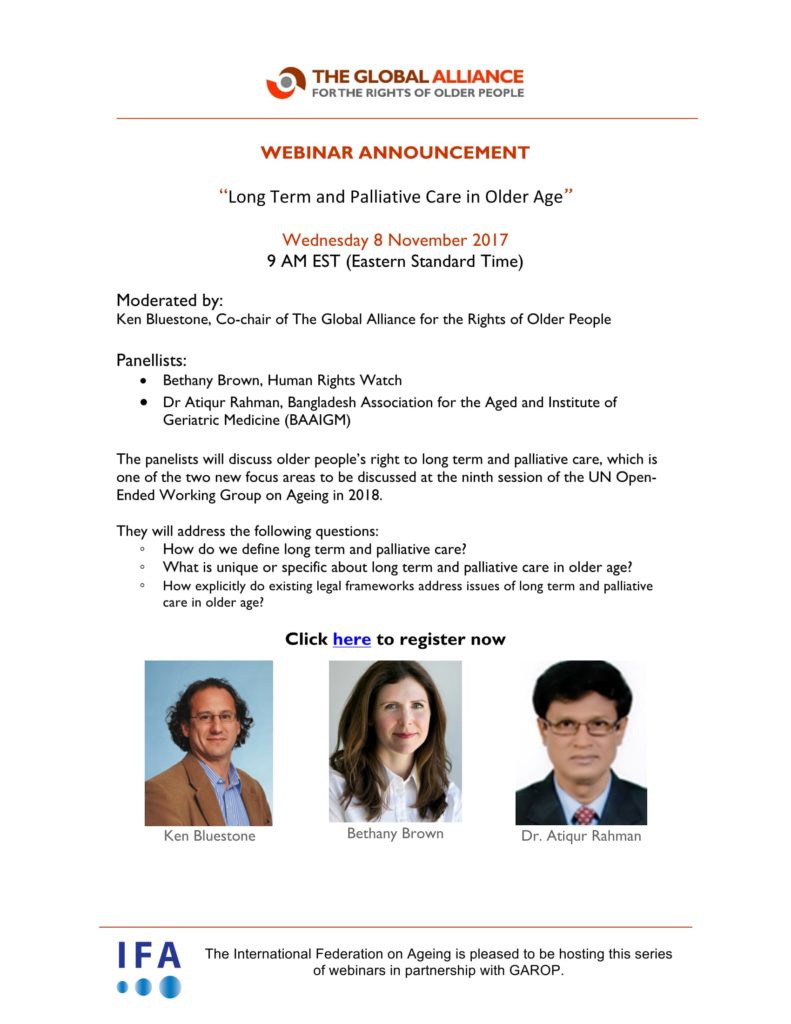 On 8th November, GAROP held the second in a series of webinars organised in partnership with the International Federation on Ageing. The discussion focused on long term and palliative care, one of the two new focus areas for the ninth session of the UN Open-Ended Working Group on Ageing (OEWG).  The webinar was moderated by Ken Bluestone (Co-chair of GAROP) and the panelists were Bethany Brown (Human Rights Watch) and Dr Atiqur Rahman (Bangladesh Association for the Aged and Institute of Geriatric Medicine (BAAIGM).

You can listen to a recording of the full webinar here.

Bethany highlighted some of the gaps in the existing international legal framework with respect to older people’s rights. The failure to see older people as rights holders leaves them vulnerable and open to abuse.  The OEWG process is an important opportunity to address this. The regional Inter-American convention on older people rights is an example of one attempt to remedy these gaps. This binding regional instrument covers long term care and palliative care. It is important to recognise the interconnectedness between a number of human rights such as the right to health, long term and palliative care, bodily integrity, informed consent, privacy, the right to an adequate standard of living, and freedom from torture and inhuman or degrading treatment.

Both panelists acknowledged that culture is not a substitute for human rights. Even in countries and regions where older people are traditionally respected and honoured, legal standards and instruments are necessary to ensure that older people’s rights are protected in practice.  In Bangladesh, it is generally expected that older people will stay in the family and be looked after, especially by female family members. Now that more women are studying and working, this is happening less. The disproportionate disadvantage and cumulative discrimination experienced by older women was also noted by both panelists.

Bethany emphasised how autonomy is crucial to the realisation of every right. The key to realising rights is about making choices. This autonomy can be taken away through the denial of legal capacity or in many other informal ways. We must support older people’s right to make their own choices and decisions.

In concluding the discussion, Ken explained that the UN will soon invite accredited organisations to submit written inputs on the focus areas of long term and palliative care and independence and autonomy. He encouraged accredited organisations to work with their Governments, National Human Rights Institutions, older people themselves and other experts at national level to raise awareness of this process, build a dialogue around the focus areas and respond to this call. He also urged organisations who are not currently accredited to urge their Governments to consult and respond. He also encouraged them to consider applying for accreditation ahead of the next ninth OEWG session. You can find more information about the benefits of accreditation and how to apply on the GAROP website.

The next webinar in the series will focus on Independence and Autonomy.